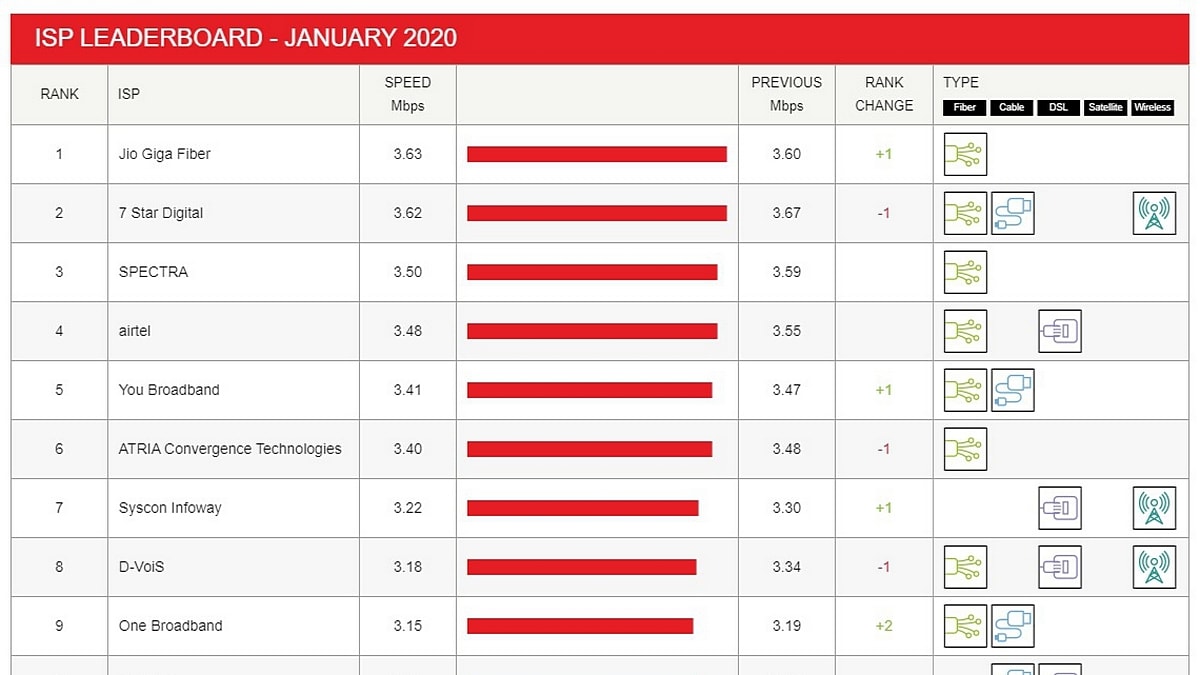 Reliance Jio Fiber has consistently maintained its position among the fastest Internet Service Providers (ISPs) in Netflix’s ISP speed index, but in recent months, it had dropped. Now, for the month of January, Jio Fiber has regained the crown of the fastest ISP, leaving behind Airtel, Spectra, and 7 Star Digital. Jio Fiber provides an average speed of 3.63Mbps while Spectra offers 3.50Mbps and Airtel gives 3.48Mbps. In November and December last year, 7 Star Digital had the top spot but has now fallen to second place with 3.62Mbps in January’s list.

Netflix measures the streaming speed by looking at prime time Netflix performance on several ISPs. Some of the others on the list are You Broadband at 3.41Mbps, ATRIA Convergence Technologies (ACT) at 3.40Mbps, Syscon Infoway at 3.22Mbps, D-VoiS at 3.18Mbps, One Broadband at 3.15Mbps, and Hathway at 3.14Mbps, among others. You Broadband and Syscon Infoway gained one spot compared to the last speed index while Atria Convergence Technologies, D-VoiS, along with 7 Star Digital lost a spot.

JioFiber was at the top spot at the beginning of last year till April, after which it lost its lead to 7 Star Digital. By September 2019, JioFiber’s performance dropped quite a lot when it was commercially launched. Then, in November it climbed to the top three and has now taken the top spot once again.

Reliance Jio Fiber gives a minimum speed of 100Mbps. It is a full-fibre connection that provides services in major cities all over India. Along with the 100Mbps, there are 250Mbps, 500Mbps, and 1Gbps plans as well but all of them have an FUP limit.

TelecomTalk states that Airtel Broadband used to be the largest ISP in India before Jio Fiber entered the game. Airtel also aims to bring 100Mbps base speeds and is working to expand coverage to other cities, and not just the major ones. On the other hand, BSNL is unable to enter the top 10 list even though it also has 100Mbps plans.