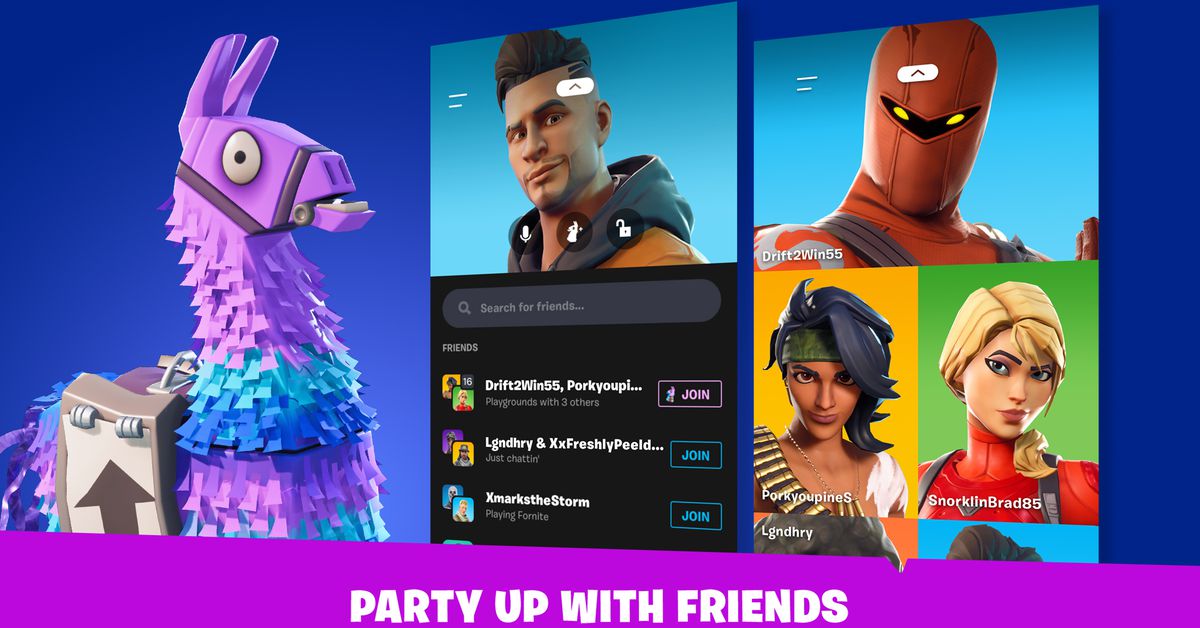 Fortnite today added cross-platform voice chat, a feature that lets friends talk even if they’re not currently playing the game. Party Hub, which is available in the game’s mobile apps, lets you see which of your friends are online and start audio conversations with them. The feature is based on similar technology developed by Houseparty, the group video chat app that Fortnite maker Epic acquired in June.

For now, chat is limited to audio, though the company says that text chatting is under development. (Whether it someday adds video chat, which is Houseparty’s core feature, remains an open question.)

You can talk to friends in the Party Hub even if they’re playing a game and you’re not. Or, if you start a conversation in the mobile app but want to play on a PC or video game console, just open Fortnite on that device while you have the app open and the chat will transfer there.

You can also prevent people from starting chats with you or joining your party by tapping a lock icon over your avatar. Or you can invite new people to your chat by ringing one of the game’s llama bells on various screens throughout the app.

In a blog post, Epic said that “Party Hub creates new possibilities for syncing up with your squad and staying in touch with friends, and right now we’re just scratching the surface of what’s possible.”

When Epic acquired Houseparty, it promised to “build even more fun, shared experiences” using that app as a foundation. With today’s introduction of the Party Hub, that idea is coming into view.

“Games can be a foundation for socially connected community in a way that is different from some of the other platforms that are out there, that are increasingly too political or controversial,” said Sima Sistani, Epic SF studio director and Houseparty CEO.

Fortnite, which is free to play but has been massively successful selling in-game cosmetic items, has effectively become a social network unto itself for a generation of young teenagers. The majority of current players play with friends, the company says. Viewed from that perspective, adding social features like audio chats is only natural.

“We have this opportunity now, because of the business model,” Sistani said. “It allows us to really take a stab at building social in a way we aspire it to be — a more positive, complimentary community.”

Party Hub will be rolling out today in Fortnite’s apps for Android and iOS.