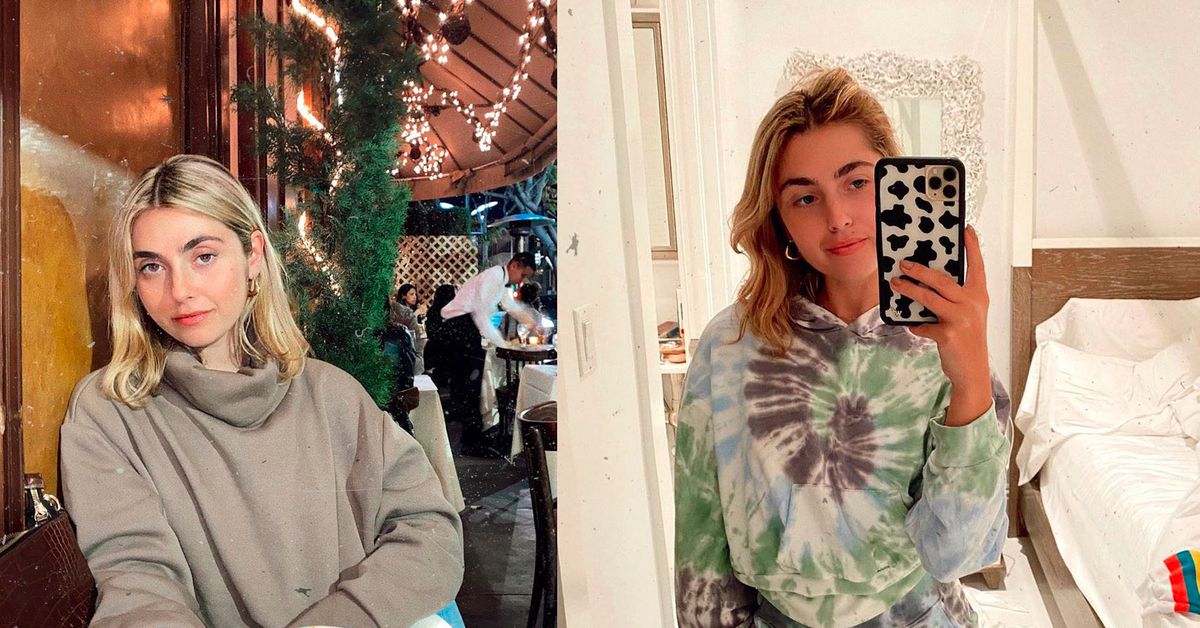 Elizabeth Savetsky, an influencer who lives in New York, has kept her Instagram feed pristine up until now. In every past photo, she wears an enviable outfit with perfectly done hair and, occasionally, her smiling, tall plastic surgeon husband. They’re photos that make people wish they could live in her shoes. But things are changing now that she’s stuck at home because of social distancing: she can’t hire photographers, she isn’t attending events, and she’s dressing up for no one other than her family. Her posts are starting to reflect this new reality.

For the first time, Savetsky recorded herself singing, surprising her followers who likely had no idea she had a good voice. Last week, she posted a selfie showing off her natural, wavy hair and minimal makeup (though she did later delete it). Her most recent posts are one of her on the couch surrounded by snacks and an old photo with her mom in which she laments the days when they could hang.

Fashion influencers’ accounts might never be the same after the pandemic ends, and it’s already forcing them to adjust how they make content and what they post. Sure, they’re still receiving swag in the mail to produce unboxing and try-on videos, but they’re also grappling with the pandemic themselves and figuring out how their accounts should look. Do people still want to see cute outfits during a recession? How do you take a studio-quality photo when the only photographer available to you is your husband? What happens when you feel mentally and emotionally exhausted? The curated aesthetic people have railed against — which has defined much of Instagram up until now — might slowly disappear.

“It’s going to force us to be more creative,” Savetsky says. “I’ve been posting on Instagram for about seven years now, and so it’s nice to almost have this challenge that’s forcing me outside the box because we all tend to get into these habits of doing the same thing over and over again, shooting on the same street corner always, and we can’t do that anymore.”

Influencers hope to keep working with clothing brands, although those brands might shift from advertising going out attire to leggings or comfortable clothes. The photos they take are also going to be more off the cuff with minimal backdrops and whatever they can work with at home. The professional photographers are going away, too, as are the studios they rent to shoot.

The business will go on, though. Katie Sands, another influencer who runs both an Instagram account and fashion blog, sees the pandemic as an opportunity to have more honest, personality-driven conversations.

“I have had a bunch of followers reach out and say, ‘What do you think is going to happen to the blogosphere? Do you think blogging industry will go away?’ and I, personally, think it’s actually the opposite,” Sands says. “I think that it’s going to become stronger than ever. People, including myself, I’m looking to the creators I follow for different inspiration — for home recipes, for workouts, for work from home outfits, for beauty advice.”

Her Stories now include videos in which she dances with her dad because she’s social distancing in her parents’ home. She also tapes her boyfriend trying on swag she’s sent. Her videos are clearly made in her house. Sands is also going live on her page every Thursday with her therapist to help other people work through the stress and anxiety of a pandemic. One of her most recent posts is a video of her dancing in a kitchen, her phone clearly propped up against something. It’s not bad-looking, but it’s different than older photos of her laughing with friends or dressed up at a party, posing for a photographer.

Fashion influencers’ photos often look good because they hire professionals to help them shoot. That’s not the case while social distancing. Another influencer, Charlotte Bickley, says her mom now doubles as her photographer and will shoot her photos while they’re isolated in Florida.

“Obviously in this time everyone understands that they’re not going to be the most glamorous shots,” she says.

The logistics of those brand deals also have to be renegotiated. Sands says one of her agreements specifically requires her to take street photos, which she’s unable to do because of quarantine restrictions. Her brand partners are also putting deals on pause while they figure out their own strategies, which she understands, but it also means her income is limited.

“Like everyone else, my business has been hit so hard,” Sands says. “When the brands don’t want to do the partnership, when I’ve already allocated them into my monthly budget, it’s hard,”.

Sands says most brands have been receptive to hearing alternative ideas, like posting on Stories rather than the grid or finding a way to make the messaging cater to the situation at hand. Brands that aren’t on board are told to talk to her agent, she says. Still, she’s hoping she’ll be able to go back to posting more regularly this week. (Last week, she did promote a vitamin company in both her grid and Stories, angling it around the pandemonium COVID-19 has created.)

Granted, if the pandemic slows down and social distancing is lifted in only a few months, these influencers’ honest glimpses into their lives might go away, too. Followers will have gotten only a momentary peek into their favorite influencers’ actual lives.

“We’re in a serious time and it’s creating serious conversation,” Savetsky says. “I see a lot of my influencer friends going deeper than they usually would and posting different kinds of content. It’s going to change the industry for the better and make it less-curated and make it more relationship-based with influencer to follower.”